"My skills cannot be taught, I was born this great."
~Demethon
There are 9 players online
Time till next reboot: 50h 29m 43s
You are not logged in [Log in]

Throughout history, scholars have speculated about how spheres of divine influence are reflected in the geographical layout of the realms. While this remains yet to be proven, it is an interesting hypothesis and as such deserves to be presented here.

by Rupert Giles, Professor of Theology

While the Central Castle is no doubt the commercial and traffic hub of the realms, in a more spiritual sense its name is a misnomer. As a number of esteemed scholars have noted in the past, the spiritual and divine center is, in fact, Everlund. It is here that the godly lines of force converge and create a field of supreme power. It is not by accident that the city is home to both the priest and the sorcerer guilds. If the Central Castle is the brain of the lands, Everlund is its heart.

Taking this observation as a starting point, I have attempted to chart the divine spheres of influence as they spread out from their focal point and across the various lands. In some places, the results are obvious - areas under Tempus' rule have often a strong military presence, Istishia exerts her power over the island of Hercyna, while Silvanus oversees the heavily forested areas west and southwest of Central Castle. Elsewhere, they can be more subtle, or even contested as in the case of Bloodwych, where Lathander's rule is being continually challenged by minions of evil, only kept at bay by Palantha's holy warriors and the brave priests of Everlund.

After years of working both with first hand experience and reports from adventurers, and of researching the various libraries, I was able to chart the following map, showing how the world is divided into the different spheres of influence: 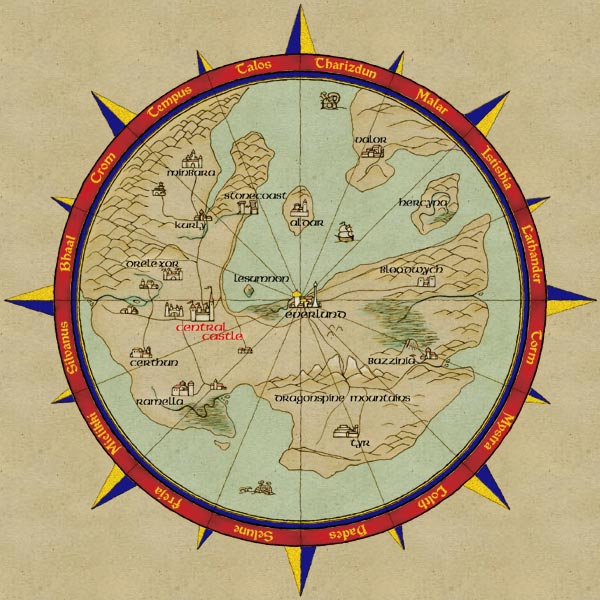 As my research shows, the divine influence is truly omnipresent. By keeping our minds and our eyes open, we can detect it in the most mundane of places, and it helps our understanding of the gods if we watch, every day, what forms their power can take.

Professor Giles is Head of the Theology Department at the university and senior member of the Everlund Theological Society.